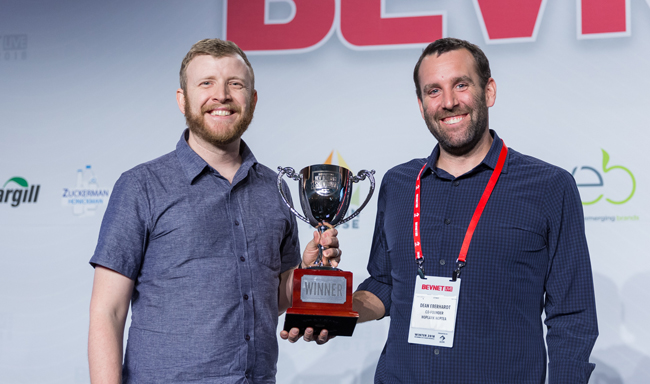 “I woke up at about 4:30 this morning and spent five hours walking the beach learning my pitch,” HopTea co-founder Dean Eberhardt told BevNET after his victory. “We’ve learned so much and we saw it as an opportunity really to position ourselves with great feedback from the industry.”

According to Eberhardt, though the product was created to fill a white space for beer alternatives, the company does not see the brand as a non-alcoholic beer but rather “a cool new kind of tea.” The brand launched in 16 oz cans in Whole Foods Market stores in the Rocky Mountain region earlier this year.

“I thought HopTea was the most innovative thing that we saw,” Sadowsky told BevNET after the competition. “There are six criteria that the judges are supposed to judge by, and I think the market readiness of that one was definitely high. And I thought that using the whole six criteria evenly weighted they just had the best chance.”

On stage, Sadowsky said he didn’t believe any of the six finalists were “completely ready for prime time,” but noted most of the issues were easily solvable each brand had significant strengths. Speaking to BevNET, he said he believed HopTea should use consumer feedback to get a better grasp of product identity and whether the brand wants to be a part of the tea aisle in retail or if it better belongs with non-alcoholic beers.

Mattie told BevNET she believed HopTea had a unique brand proposition and that the flavor was “refreshing.”

“It’s a new opportunity and it came out of a need, the founder really had his own need and that’s what created the product,” Mattie said. “We think that the packaging can continue to be enhanced, and he really needs to get clear on where he wants to be in the store. But it’s something interesting and that was surprising to us.”

According to Eberhardt, the next steps for the brand will include refining the packaging, as well as opening a tap room in Boulder, Colo. Speaking on the Livestream Studio, he complimented the constructive feedback and added that he is think about best approaches to better position the brand.