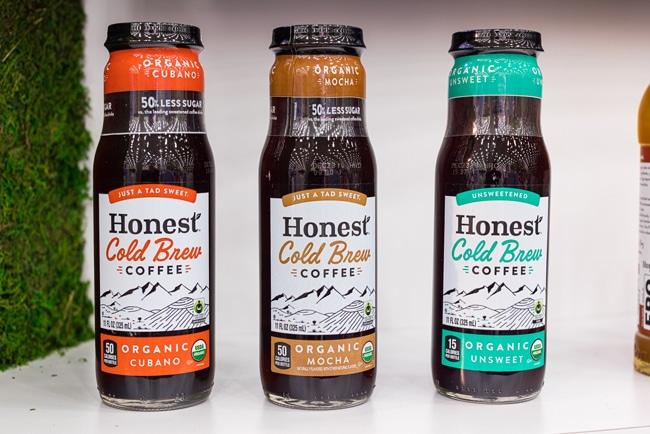 Having secured a healthy piece of the organic tea market, Coca-Cola is shifting Honest Tea into the cold brew game this fall with the launch of a three-SKU line in 11 oz. glass bottles.

Speaking with BevNET at the show, Honest co-founder Seth Goldman noted that the brand has been active in coffee — including whole beans — in Europe for some time; “Innovation can come from all over,” he said. This one, however, came through Coke’s Minute Maid segment, and reflects the fluid nature of product development across the soda giant’s portfolio. Prior to Coke’s acquisition of $5 billion acquisition of Costa Coffee in August 2018, the company showcased non-organic RTD cold brews under the Far Coast brand, which has since quietly been shelved.

With Honest positioned as premium organic offering that’s also shelf-stable, it will slide in next to branded PET-format RTDs from McCafe (frappes) and Dunkin’, not to mention robust coffee lineup under Monster, with still more to come. Having seen Keurig Dr Pepper — itself owned by international coffee powerhouse JAB Holdings — flex its muscles with RTDs from allied brands Peet’s, FORTO and High Brew over the last year, not to mention the ongoing battle for share with Starbucks-PepsiCo, Coke appears to be shoring up its coffee roster. This includes quiet participation in a $2 million investment round in North Carolina-based Slingshot Coffee Co., makers of cold brew, cascara and coffee soda.

Available in unsweetened (15 calories), mocha and Cubano (30 calories each from organic cane sugar), Honest’s cold brews fit within brand’s guidelines of organic, low calorie and Fair Trade certified products. The products are dairy free and are made with a blend of Colombian and Ethiopian coffee beans. The line will initially be limited to food service outlets on the West Coast upon its projected launch in early 2020.

Meanwhile, Honest is also launching a two-SKU line of cold brew teas in 46 oz. multi-serve PET bottles, a move that Goldman said was motivated by brand “missing out” on cold case. Though positioned as having a smoother taste than non-cold brews, the launch of Green Tea with Jasmine & Honey and White Peach with Apricot (black tea base) is mainly about diversifying Honest’s presence within grocery. The line is expected to debut in January. 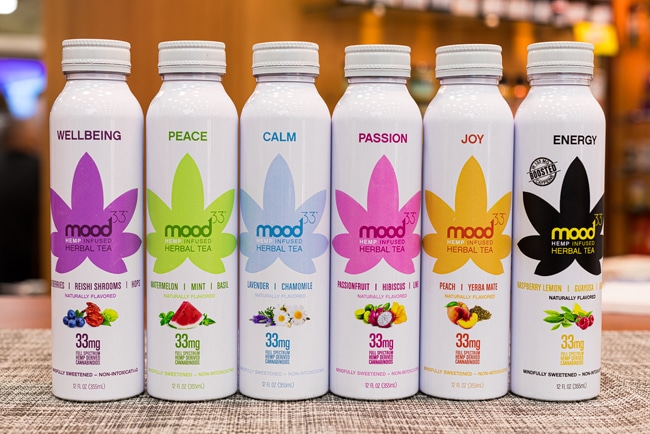 Since launching last year, cannabis-infused beverage maker Mood33 has established itself in the California dispensary channel as an intoxicating sparkling tonic. Now, the BeyondBrands-backed company is looking to expand into mainstream retailers with a line of CBD-infused herbal teas.

Speaking with BevNET at the show, Mood33 co-founder Eric Schnell said the company has quickly moved up the ranks among the THC-infused beverage brands in California and received requests from retailers to release a CBD-only variety following the passage of the U.S. Farm Bill in December.

The new hemp-infused line also reunites Schnell with his Steaz co-founder Steven Kessler, who has joined the brand as chief sales officer. Schnell had left the organic green tea brand in 2010 prior to its acquisition by Novamex in 2016, while Kessler left the brand shortly after the sale. Now the duo plan to apply a “rip and repeat model” from their Steaz strategy to Mood33 in order to fast track growth.

“We know all the competition, it’s a lot of young bucks,” Schnell told BevNET. “But none of them are seasoned beverage entrepreneurs that have been through what we’ve been through.”

According to Kessler, the current regulatory environment surrounding CBD food and beverage products has limited the company’s go-to-market strategy. He said Mood33 has targeted 22 “safe states” and is identifying local distributors and retailers who are friendly to the category. The brand has also partnered with World Finer Foods as its master distributor.

“The big boys are not friendly [to hemp] right now and understandably why,” Kessler said. “But at the same time a lot of the regional, quality retailers are going to jump in the game just like we did to capture the opportunity before others do.”

The hemp line also splits Mood33’s structure into two divisions. While Kessler will head the hemp-infused products, Mood33 co-founder Michael Christopher will focus on the brand’s THC products in the California market. Schnell will divide his time between both sides of the business. As well, the brand has launched consumer education efforts, including a new website that highlights the differences between the two lines. 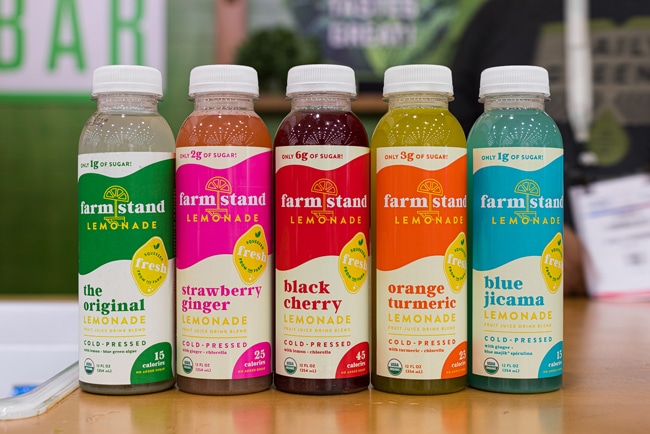 Though listed under LIVE Soda, booth #1553 saw various holdings of Texas-based Great Point Brands all housed under one roof. Though new lines Rama and Farmstand Lemonade were the big features, the company’s evolution can be traced back to changes made in Daily Greens brand.

Most notably, there wasn’t a classic cold-pressed green juice in sight at the booth. Instead, Daily Greens brand structure has been streamlined and specified: the single-SKU Daily Celery now stands alongside Daily Probiotics, a cold-pressed fruit and vegetable juice line that includes 1 billion CFUs per 12 oz. PET bottle. That line comes in three “Morning Greens” varieties: Pear (with kale and ginger), Pineapple (with spinach and mint) and Orange (with kale and lemon).

Though Daily Greens roster has been winnowed, the brand’s lemonade-inspired “Green ADEs” lineup, originally launched in January 2017, continues on in the guise of new brand called Farmstand. The new lineup of organic, high-pressure processed lemonades features a couple flavors pulled from DG’s former ADEs — including blue jicama and orange turmeric varieties — but also new SKUs like Black Cherry and Strawberry Ginger alongside original Lemonade flavor. Farmstand uses stevia to keep sugar count down; the line ranges from 1-6 grams of sugar and 15 to 45 calories per bottle, depending on the SKU. At suggested retail price of $3.99, line is rolling out to retailers including H-E-B, Earth Fare and Whole Foods.

Meanwhile, new line Rama takes a similar route with low-calorie, unsweetened teas. Also launching at an SRP of $3.99, Rama is positioned as a premium HPP offering with an exotic touch, via the use of butterfly pea flower tea native to Malaysia. Each SKU, packaged in 12 oz PET bottles, uses a different name vaguely tied to function (“Glow,” “Boost,” “Restore,” and “Zen”) and boosted with botanicals like rose petals, hibiscus, lavender, holy basil and others.

Yet Live Soda remains the most mature brand in Great Point’s portfolio. Representatives at the booth noted that the probiotic soda line has been recently reformulated to have “increased flavor,” while natural colors and erythritol have been dropped from the ingredients list. 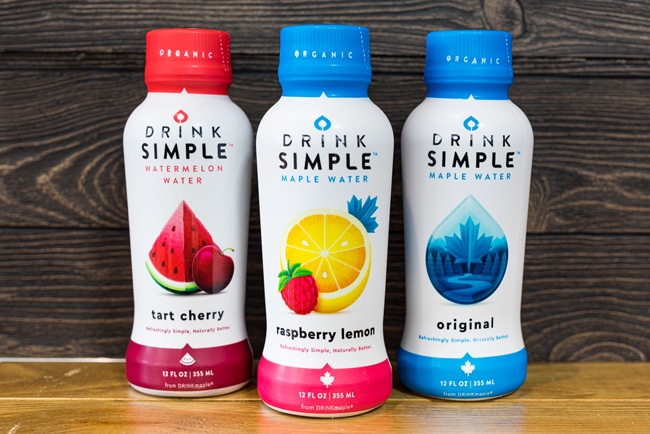 Maple water maker DrinkSimple told BevNET at Expo East that the company is expanding its business-to-business arm as a supplier of maple water, partnering with several beverage companies looking to create maple-flavored products.

“As a brand we’re sticking to our mission and sticking to our SKUs, so we don’t want to be creating all these different use occasions, but that doesn’t mean that maple water isn’t a great ingredient for other people to do if it fits in their brand,” Weiler told BevNET. “For us, this helps build the category, it helps get this amazing ingredient into other products without us going and making it.”

According to Weiler, while some farms are able to produce maple water seasonally, DrinkSimple controls much of its own supply chain and is capable of year-round production.

DrinkSimple has also partnered with Lululemon to produce two exclusive flavors of its sparkling maple water line for the athletic apparel company. The co-branded products will be available in select Lululemon stores starting next month, Weiler said.

Weiler said Lululemon is currently adding coolers for food and beverage products to select locations across the country and had initially reached out to DrinkSimple to discuss stocking its sparkling maple water products. The two exclusive flavors will be Pineapple and Cucumber Lemon.