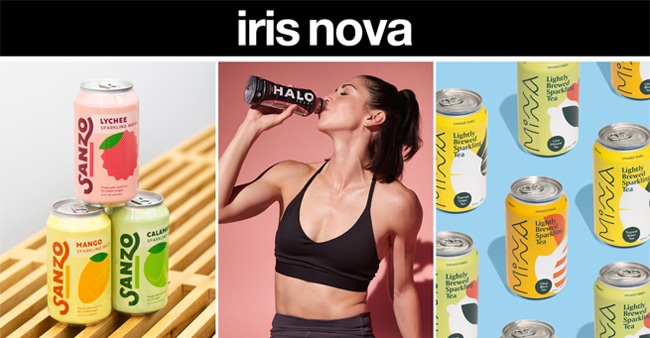 Beverage company Iris Nova has announced the first four beverage brands to be featured on the company’s “c-commerce” platform, which allows customers to order via text message and receive product within two days.

Iris Nova has also taken an equity stake in each of the brands, and is projecting the addition of 12 beverage makers to its portfolio by the end of 2019. The size of the respective investments was not disclosed; However, Iris Nova CEO Zak Normandin announced in June the company plans to spend $100 million building a portfolio of consumer brands over the next three to five years.

“We’re selecting brands to fill gaps in the market, providing better options to compete with high-sugar, high-calorie offerings of legacy beverage industry giants. Combining this selection with frictionless technology allows for easy access to healthier beverages that complement the modern consumer’s lifestyle,” said Normandin in a statement provided to BevNET.

“This generation lives on their phones. We’re hungry – Caviar or UberEats can get it to us within the hour. Need a new outfit for tonight – Net-A-Porter/Mr. Porter can deliver same day,” said Minna founder Ryan Fortwendel in a statement. “Iris Nova is finally catching the beverage industry up with the rest of the markets and giving us a direct way to connect with our loyal customers. It’s a huge added value that most DTC channels haven’t fully been able to capture.”

Iris Nova’s other investments include Sanzo, a New York-based sparkling water in 12 oz. cans, which is made with real fruit and sold in three Asian citrus flavors: calamansi, lychee and mango. Meanwhile, Halo Sport, which launched in November 2018, is positioned as a better-for-you, organic sports drink line with 10 calories per 16 oz. bottle and no added sugar.

Expanding the company’s distribution portfolio represents the next growth phase for New York-based Iris Nova, which has spent the last several years proving the concept for its text-based c-commerce system through its flagship functional beverage brand Dirty Lemon. At $65 per 6-pack, the company has shipped over 2 million bottles of Dirty Lemon — spread across various SKUs featuring ingredients tied to health and wellness, such as aloe, collagen and turmeric — with around 90% of those sales coming through its platform. The brand has also invested in experiential activations like The Drug Store, a cashier-free store in New York City where product is dispensed via a tech-enabled honor system.

Last year, Iris Nova’s profile was raised in December after The Coca-Cola Company’s Venturing and Emerging Brands (VEB) unit led a $15 million investment round in the company that included former New York Yankee Alex Rodriguez, former AOL CEO Tim Armstrong and actor/entrepreneur Kate Hudson. At the time, Normandin told BevNET the funding would go towards supporting the company’s goal of surpassing $100 million in revenue by 2021.

Minna, along with Sanzo, Halo Sport and Vina, will also be sold at the cashierless portion of The Drug Store; locations also feature a bar offering freshly prepared beverages that are not available for purchase nationally.

As a beverage distributor, bringing on new brands positions Iris Nova as a direct competitor to Amazon, a comparison the company is not shying away from. Iris Nova currently offers same day delivery in New York City and next-day delivery to all major U.S. markets, and the company’s stated goal is to beat Amazon Prime shipping speed to all U.S. customers by 2020.

Minna is now available for $30 per case of 12 cans, or around $2.50 each, with a minimum order of one case. Halo Sport and Sanzo will share the same pricing structure upon launch. Minna is currently available on Amazon, including next-day shipping via Prime, for $25.98 per case.