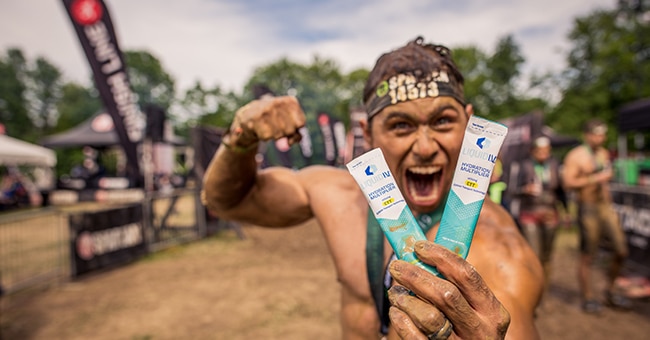 As VP of Global Partnerships at Spartan Race, Ian Lawson understands that, when compared to extravagant music festivals or luxury hotels, his brand may not be the easiest sell to potential partners. It’s not a matter of exposure; The company, which operates over 250 annual events in over 40 countries worldwide, has emerged as a leading player in the growing realm of high-intensity obstacle-course races, with more than 5 million participants since launching in 2010. But depending on the consumer the brand is trying to reach, partnering with a brand whose flagship product is a grueling day’s worth of Navy SEAL-style challenges — think hauling sandbags uphill and leaping over open flames — may or may not be a great fit.

“It’s not Coachella,” said Lawson in an interview at Spartan’s headquarters in downtown Boston. “It takes commitment, but it has higher value when people go through the experience, and the brand partnerships are critical in that.”

Food and beverage have long been key parts of that strategy; Echoing its own approach to disrupting the fitness event market, Spartan initially focused on working with growing entrepreneurial brands in relevant categories, collaborating with the likes of natural energy brand EBOOST, protein drink Core Power and FitAID, which was seeded in another fitness lifestyle community, CrossFit, and has been a partner since 2016.

As Spartan enjoyed strong interest from weekend warriors and young professionals, it sought brands that aligned with the company’s mission and were approachable enough to win a wide audience yet aspirational enough to be distinctive in a crowded market. That growth has coincided with an expansion in the range of food and beverage brands that it can potentially work with. GT’s Living Foods was signed to serve kombucha at all U.S. events in 2017 and BodyArmor came onboard as the race’s official sports drink the following year.

“We still have and will always maintain a very edgy position from a brand aspiration perspective,” he said. “But if you peel back who we are, we are really a gender neutral, age agnostic, extremely approachable brand.”

In the context of Spartan Race, there are a few tried and true categories: hydration, recovery, energy and the all-important post-race “finisher beer,” according to Lawson. However, the recent development of niche fitness subcategories has also opened other opportunities; a product like rapid hydration mix Liquid I.V, which came onboard this summer as an offering at the event, threads the needle between sports drink, functional beverage and convenience product. Meanwhile, the company’s newest beverage partner is Adrenaline Shoc, one of several brands powering growth in the nascent performance energy category. As such, keeping its various partners from encroaching on each other while giving them space to grow has been a primary focus.

“An energy drink may not be the right thing to give somebody after they’ve just ran 12 miles,” Lawson said. “But pre-race, absolutely. Post-race, after hydration, absolutely. As part of a lifestyle, absolutely.”

Product innovation is helping open up those opportunities as well. With 300 mg of caffeine per 16 oz. can, plus electrolytes and branch chain amino acids (BCAAs), Lawson said Adrenaline Shoc — which has no added sugar or artificial colors — is an example of a product that Spartan has “been waiting for.” He noted that Spartan had declined previous opportunities to enter the segment “because we couldn’t work with some of the other brands we’ve wanted to work with in the past.” Backed by experienced industry players and armed with the national distribution power of Keurig Dr Pepper (KDP), Adrenaline Shoc has the potential to help further bolster how major beverage brands view the commercial power of obstacle course racing, Lawson suggested.

“Ten years ago, we’d say to the big beverage companies — ‘I may love your brand but I hate your product.’” he said. ”In the early days, we held out on the soft drinks and it hurt us from a revenue perspective. All of a sudden, [major brands] are now looking at endurance sports as a viable property to seed their products, and they have the budget to support it. I think we are really into the next phase of the industry where people appreciate experiential marketing and the opportunity to create content.”

Having worked with brands like Clif Bar in the past, Spartan is also now going deeper into food, including fresh products. The company recently launched a partnership with meal kit delivery service Fresh Meal Plan. Other partners include Kashi GO, high-protein snack Gone Rogue Chips and Honey Stinger, a maker of honey-based snacks and gels. The company also sees opportunities to thread the needle between food, beverage and technology: in October, it announced Vejo, a personalized nutrition pod-based blender system, as its Official Mobile Blender and Nutrition Partner. Each biodegradable pod produces one 8 oz. freeze-dried fruit and veggie smoothie.

While things stay on the non-alcoholic side pre-race, that changes when teams complete the course. The post-race “finisher beer” has become a major part of the experience, but the rise of craft has complicated Spartan’s approach to the segment. The company is currently working with a patchwork of six regional partners — including Boston Beer Co., Jack’s Abby and White Claw — spread across the country while searching for a single national brand that can “have us basically activate them, especially if it’s a launch product,” Lawson said.

“We offer a 100% turnkey service,” he said of Spartan’s beer program. “The partner just needs to become the official beer of Spartan and then we manage everything else, from pulling the beer license, merchandising and setting up the beer garden, plus we can do all the media in-house.”

With a growing roster that includes Harley Davidson, Yokohama Tires and Japanese digital marketing giant (and major pro sports sponsor) Rakuten, Spartan’s roster of partner companies extends far beyond CPG. Following the completion of its contract with BodyArmor this year, Spartan is on the hunt for a new partner in the sports drink space. With over 120,000 children expected to participate in events this year, Lawson said there’s also significant opportunity for kids-focused products. As long as there’s an opportunity to build connections — and content — valuable to Spartan’s audience, the company will explore the possibilities.

“If a partner wants to buy your rights but doesn’t have an experiential, influencer or retailer strategy and the content to leverage it, I don’t want to take their money,” he said. “The cost of doing partnerships in the Spartan world is less, but the (other companies) may have more eyeballs. The difference is our eyeballs are the customers they want to get to.”