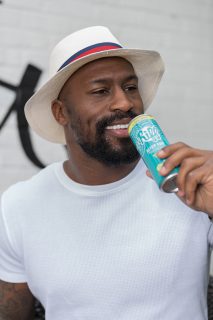 BEND, Ore.— Riff Cold Brewed, an Oregon-based coffee company, has added former Super Bowl champion Vernon Davis to its advisory board. Davis, a 15-year NFL veteran turned entrepreneur, who over the past few years has aligned himself with several purpose-driven companies, has engaged with Riff after being inspired by the company’s strong sense of purpose, aligned values, and commitment to positive and social environmental impact. Davis will focus on helping the Riff team build brand awareness, develop new product innovations, and further strengthen its commitment to social equity and inclusion.

“Coffee has a way of flipping our mood, a way of bringing us closer, a way of leading us down the road less travelled. Riff does that and then some,” said Davis. “I was instantly drawn to Riff’s creativity, innovation, and passion for craft, as well as the company’s commitment to reducing coffee’s contribution to climate change. I’m incredibly excited to have joined Riff’s advisory board and look forward to helping the brand realize its vision.”

Riff is a coffee company based in Bend, Oregon, on a mission to celebrate 100% of the coffee plant’s agricultural value. The coffee bean’s incredible range of naturally occurring flavors are celebrated in Riff’s cold brewed coffees. And the naturally sweet, naturally caffeinated, fruity pulp that surrounds the bean, coffee fruit (cascara), is upcycled into a clean, plant-based sparkling energy drink, called Alter Ego (named for being coffee’s lesser-known counterpart). With Alter Ego, Riff is creating a win-win-win-win scenario by providing an economic boost for coffee farmers, adding sustainability to the coffee industry, reducing coffee’s impact on the environment, and delivering an exciting and refreshing good-for-you and good-for-the-planet afternoon pick me up to consumers.

“It has been amazing getting to know Vernon,” said Paul Evers, Riff Co-Founder and CEO. “Of course, prior to meeting him, I knew his name based on an incredible career in the NFL. But I’ve been blown away by the depth of his character, his passion for business and innovation, and his deep concern for the well-being of his community and the planet. He is a natural extension of the Riff team and will add a ton of intellectual, creative and strategic value as we work together to realize our dream of helping the planet by creating good-for-you products.”

Riff is a coffee company based in Bend, Oregon co-founded by a team of industry veterans and entrepreneurs on a mission to explore and celebrate all of the wonders the coffee plant has to offer. Riff launched its line of ready-to-drink cold-brewed coffees in 2018 and quickly garnered awards and the accolades from the world’s largest Cold Brew Fest (People’s Choice Best Cold Brew and Industry Choice Best Nitro Cold Brew), Oregon Entrepreneurs Network (2018 Early Stage Company of the Year) and Bend Venture Conference (2019 Winner of the Impact Category) to name a few. Riff’s latest innovation is Alter Ego, a natural energy drink brewed from upcycled coffee fruit (cascara). By utilizing 100% of the harvested coffee, Riff is helping create a win-win-win-win scenario by providing an economic boost for coffee farmers, adding sustainability to the coffee industry, reducing the impact on the environment and delivering a clean-label energy drink to consumers. Find Riff’s full line up of cold-brewed coffee and 3 flavors of Alter Ego at the Taproom in Bend, or at your local retailer in the Pacific Northwest, Northern California, Montana, Wyoming, Arizona, and on Amazon. For more information visit letsriff.com or call 458-206-0825.

About The Riff Advisory Board

Vernon Davis is a former American football tight end. The 15-year NFL veteran was selected by the San Francisco 49ers sixth overall in the 2006 NFL Draft and played his first 10 seasons with the 49ers. He landed with the Denver Broncos in 2015 during their Super Bowl 50 run. He joined his hometown team, the Washington Redskins, in 2016 and spent four seasons there before retiring after the 2019-2020 season. Off the field, Vernon is a budding entrepreneur, dedicated philanthropist and actor.

Vernon owns multiple Jamba Juice franchises in Northern California and is committed to opening six more stores in the Washington, D.C. metro area with Mohamed Sanu of the New England Patriots. He also has his very own supplement company, Timeless; is the co-owner of Q-Collar Innovations, a developer of innovative products intended to reduce traumatic brain injury; and the co-owner and marketing advisor for Pescavor Jerky, a sustainable seafood jerky company. In addition, he is partnered in PathWater, a new concept in bottled water that was created as a solution to help end single-use plastic pollution, as well as RASA, an Indian fast-casual restaurant in Washington, D.C. Finally, Vernon is a Limited Partner of Next Play Capital, a venture capital investment platform structured to provide specialized investors access to top venture capital funds and companies.

Navigating the business world is only a portion of his off-the-field endeavors. He also founded the Vernon Davis Foundation, which services at-risk youth of all interests and demographics, and is an aspiring actor who has shared the big screen with the likes of Dwayne Johnson and Zac Efron, among others. He has also founded two production companies, Reel 85 and Between the Lines Productions.