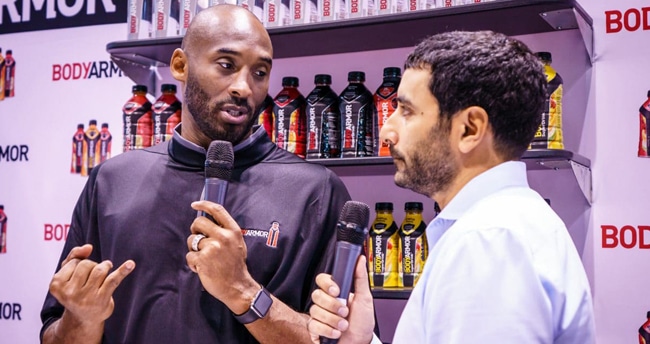 Kobe Bean Bryant, the retired NBA superstar and a major investor and public ambassador for sports drink BodyArmor, was among nine people who died in a helicopter accident in Calabasas, Calif., on Sunday afternoon. He was 41. Bryant’s daughter Gianna, 13, also perished in the crash, as did all others onboard.

Born in Philadelphia, Bryant shot to fame as a precocious 17-year old when he was selected out of Lower Merion High School by the Los Angeles Lakers as the 13th overall pick in the 1996 NBA Draft. Over the course of a 20-year-long career spent entirely in the Lakers blue and gold, the 6’6” shooting guard became one of the NBA’s all-time greatest players, noted for his relentless competitive drive in carrying Los Angeles to five championship titles in the 2000s before retiring at the end of the 2015-2016 season.

Shortly after signing a $48.5 million contract extension with the Lakers in 2014, Bryant announced his investment in BodyArmor, the sports drink brand created by FUZE founder Lance Collins in 2011 and run by Mike Repole, the co-founder of Vitaminwater, as its president. In an interview on ESPN, Bryant disclosed that he had become the company’s third-largest shareholder. The investment was estimated to be in the $4-6 million range, or about 10%, according to contemporaneous reports.

Bryant became the brand’s fourth-largest shareholder in 2018 after The Coca-Cola Company announced its acquisition of a minority stake in BodyArmor. Bryant’s stake was valued at approximately $200 million, based on the deal’s valuation.

In addition to serving as the face of BodyArmor’s marketing and promotion efforts, Bryant was deeply involved in the brand’s creative output. He wrote and narrated the brand’s 2017 television ad aired during Super Bowl LI and later created and directed its 2018 multimedia ad campaign which featured fellow athletes and BodyArmor ambassadors such as James Harden and Mike Trout. Earlier this month, Bryant participated in a launch event for BodyArmor’s new partnership with Major League Soccer (MLS).

“From my years of playing, it becomes really easy to identify those who are really passionate about what they do, and obsessive about what they do,” he told BevNET at the NACS trade show in 2017. “When it came to BodyArmor, that was the first thing I saw in Mike [Repole] .”

BodyArmor is now the second-largest sports drink sold in convenience retail and surpassed $700 million in retail sales last year, according to the company.