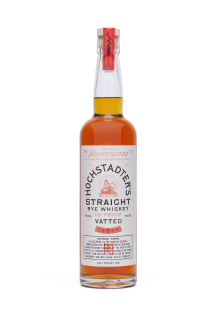 Scobeyville, New Jersey – This week, The Cooper Spirits Company, an independent, family-owned supplier of integrity-driven spirits, announced the release of its third bottling of Vatted Straight Rye Whiskey. Taken from the historic Scottish term for the process of blending several single malts in a vat to create a complex new flavor, this version of Hochstadter’s Vatted Rye incorporates five straight ryes from North America aged anywhere from 4 years to 18 years.

Initially released in 2015, Hochstadter’s Vatted Rye is the first rye to use the “vatted” designation. Straight rye whiskeys are combined in a vat and married until harmonized, and the liquid is then proofed down to 50% ABV/100 proof, creating a robust blend greater than the sum of its parts. This year’s version incorporates ryes from Kentucky, Pennsylvania, Indiana, and Canada, all of which have been aged in American oak barrels with a No.4 Char (also known as the “alligator char”) and selected from the Cooper Spirits’ whiskey library, which was curated by the late Robert Cooper. The result is a smooth, yet robust and balanced flavor, with notes of blackstrap, nutmeg, mace, clove, spearmint, German-style rye bread, black pepper and sour cherry.

“Vatted Rye is still a significantly misunderstood category,” said Chad Solomon, Cooper Spirits’ Director of Trade Advocacy and Innovation. “Vatting adds a complexity to the liquid and gives it a unique flavor profile that would be hard to achieve otherwise. What’s truly incredible about this product is Rob Cooper’s vision and foresight. Knowing the rye category was going to explode, he strategically curated the barrels in the company’s library to ensure long-term success. His overall goal was to create a product that over-delivered in every aspect, and we achieved that with Vatted.”

Hochstadter’s Vatted Rye is best enjoyed straight or in cocktails like the Old Fashioned, Manhattan and the Julep. Limited to just 1,500 cases and bottled at 50% ABV/100 proof, the expression is available nationwide at an SRP of $59.99.

About The Cooper Spirits Co

The Cooper Spirit Co., founded in 2006 by the late Robert J. Cooper, a third-generation distiller, is an independent producer of innovative, integrity-driven spirits. The company was founded with the introduction of St-Germain, an artisanal French liqueur made from fresh elderflower blossoms, heralded as one of the most influential cocktail components of the last decade by the New York Times.

Cooper Spirits produces a portfolio of artisanal products, including Slow & Low, based on America’s original bottled cocktail, rock and rye, and made with 84 proof straight rye whiskey, raw honey with a dose of rock candy, angostura bitters and navel orange peel; Hochstadter’s Vatted Straight Rye Whiskey, the first rye whiskey to use the vatted designation; Lock, Stock & Barrel, one of the world’s finest expressions of 13 year, 16 year and 18 year straight rye whiskey; and Crème Yvette, a rich berry liqueur handcrafted in France and called for by name in vintage cocktail books dating back to 1890. The Cooper Spirits Co. is based in Newport Beach, CA. For more information, please visit cooperspirits.com.