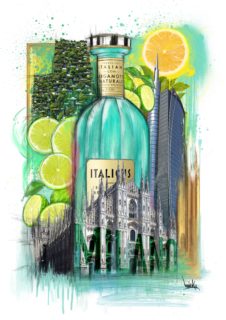 Working in collaboration with Moniker Culture, a world-leading urban and contemporary arts platform, Art of ITALICUS 2021 – Creative Talent calls upon both established and emerging artists, illustrators, graphic designers and painters to create works that reinterpret some of the world’s most iconic cities and their personalities with the vibrant and contemporary aesthetic of ITALICUS. It will feature a digital campaign, connecting with artists’ communities around the world to inspire competitors, while celebrating the featured cities and the local communities within them.

To take part, artists are asked to select one city from the following list: Rome, Milan, Los Angeles, Miami, New York, London, Barcelona, Paris, Sydney, Berlin, Athens, Tokyo, Hong Kong, or Moscow; their choice could be the city they currently live in, have visited or feel inspired by. While depicting the landscapes and iconic buildings of their chosen destination, artists are encouraged to rediscover the rich traditions behind ITALICUS Rosolio di Bergamotto to create their piece of art.

ITALICUS and Moniker Culture have also partnered with five emerging artists who have created their own Cities Reimagined works of art to galvanize fellow artists and kick off the competition. They include pieces from Mr.Penfold (Miami), Vix Black (Milan), Roxanne Dewar (Barcelona), Luke Smiles (London) and Thomas Kirk Shannon (New York) and will be released via Instagram during the campaign.

Artworks may be submitted through the dedicated website from July 5th until August 3rd. Members of the public will vote for their favourite piece of work, then shortlisted candidates will be evaluated by a panel of judges. In honor of the 5th anniversary of ITALICUS, the celebrations will culminate on September 1st with the unveiling of the competition’s 14 winners, with each receiving a €1,000 prize.

To enter, artists should upload their original digital artwork and complete the application online. Full details and judging criteria can be found at: rosolioitalicus.com/creative-talent/

ITALICUS was created by the authority in Italian spirits, Giuseppe Gallo, to bring back the forgotten Rosolio category. With keynotes of Calabrian bergamot, ITALICUS is made using the finest Italian ingredients to create a sip of Italy. The striking bottle design embodies the history and heritage of Italy’s distinctive regions, whilst telling the story of Rosolio’s time-honored traditional drinking occasion of Aperitivo. ITALICUS is one of the world’s most awarded aperitivo globally. ITALICUS Rosolio di Bergamotto was awarded Best New Spirit 2017 at the prestigious Tales of the Cocktail Spirited Awards, and Top Trending Liquor Brand by Drinks International in 2021, 2020 and 2019. www.rosolioitalicus.com

In April 2020, ITALICUS entered into a partnership with beverage group Pernod Ricard.

Moniker Art Fair has earned a reputation as one of the most exciting contemporary art fairs with its roots embedded in urban culture. Founded in 2010 in London, UK, Moniker spotlights emerging and established talent from a burgeoning and increasingly diverse contemporary art movement forged by its subversive and innovative spirit, attracting some of the most talked-about artists, galleries, and collectors from the finer side of the street art movement and its related subcultures.