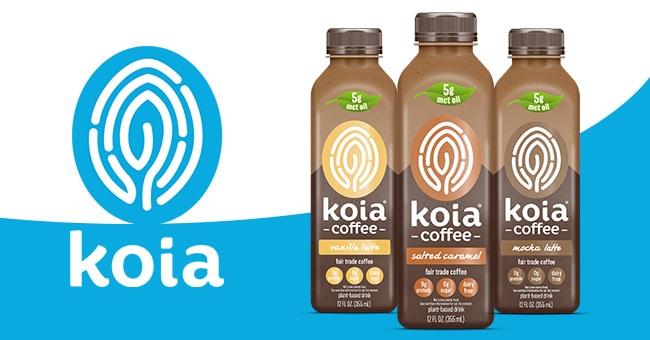 Aiming to expand its products across the refrigerated beverage set, plant-based protein drink maker Koia will launch a line of ready-to-drink coffees next month exclusively at Whole Foods stores nationwide.

Speaking with BevNET this week, Koia co-founder and CEO Chris Hunter said the new Koia Coffee line will compete in the coffee set alongside functional-positioned brands such as Kitu Life Super Coffee and Bulletproof. Koia Coffee contains 200 mg of caffeine, 5 grams of MCT oil, 9 grams of protein, zero sugar and 110 calories per 12 oz. bottle. All three flavors — Mocha Latte, Vanilla Latte and Salted Caramel — will be sold exclusively at Whole Foods for four months for $3.99 per bottle.

“There’s only so many functions and caffeine is one of the oldest, so we thought about if we played in that space what would Koia’s [caffeinated beverage] would be,” Hunter said. “We wanted it to have some decadence to it, but it’s coffee — not a protein drink — so it is going to be a bit softer than our core Koia line.”

While Koia has previously leaned into the keto diet trend, Hunter said Koia Coffee is not intended to just be a keto product although it does fit within the diet’s restrictions. He noted that the current keto consumer is already educated and will calculate net carbs on their own, allowing the company to focus marketing on the new line to the average coffee consumer seeking “an elevated option.”

According to Hunter, the coffee launch comes as the brand undertakes an omnichannel expansion. In 2019, Koia doubled its retail footprint for the core product line from 4,000 to over 8,000 stores. The Keto line, Hunter said, launched in January as a six-month Whole Foods exclusive but quickly expanded to more than 3,000 stores nationwide within 45 days after the exclusivity period ended this summer.

The expansion includes accounts in the natural and specialty, conventional grocery, mass, convenience and food service channels. Hunter noted that the brand recently completed a test run in select 7-Eleven locations and will soon expand to more locations across the country. As well, Koia’s DSD partners have focused on placing the brand in food service accounts.

“Three years ago when we launched I’d never have thought I’d be saying that we’re going to be selling in 7-Eleven,” Hunter said. “It validates that the c-store consumer is now looking for better-for-you options like Koia.”

Hunter attributed much of the growth to aggressive field marketing and increased sampling efforts. This year Koia sampled over 100,000 bottles compared to just 20,000 bottles last year. The company has focused marketing efforts primarily on the Southern California market and plans to broaden its outreach to other markets next year.

This week, Koia, which was honored as a Rising Star in BevNET’s Best of 2019 awards this week, capped off its year of team building with the appointment of Chris Pruneda as CMO. Pruneda most recently served as the CMO of Cece’s Veggie Co. and has held marketing positions at Brownie Brittle, Pirate Brands, and Vitaminwater parent company Glaceau.

Pruneda told BevNET today that coming into the company he intends to focus on expanding the type of consumer that Koia connects with.

“One of the opportunities that’s most available to Koia is simply that it’s a delicious part of any consumer’s nutritious diet and better-for-you routine,” Pruneda told BevNET. “I don’t think it has to just be for people hitting the gym and needing the protein kick, I don’t think it’s built just for people trying to live a vegan lifestyle. I think it’s a much more accessible and available product offering to a much wider group of consumers.”